Ok, so lets get the bad news out of the way first.  The skirt I have been promising is not coming.  I went out to a nice dinner and thought it would be the perfect time to wear it and I put it on and it was way too big.  Please, allow me to explain.  My weight has been fluctuating quite a bit lately.  I  lost 20 lbs. from January to May, gained back 15 lbs. in two weeks on a trip to Georgia (barbeque guys…)  then, lost 10 lbs. by the end of June, then went on a cruise for a week and gained 10 lbs. back!  Whoa!  Shit got crazy.  I am currently down 15 lbs. from my original weight.  See, I made a resolution last year to eat healthier Monday through Friday and I really stuck to it, but when I have to travel all of that goes out the window and I have done some serious travelling.  So, when I made the skirt I had significantly different waist measurements.  Had I put the damn thing on immediately it would have been perfect, now its about 3 inches too big in the waist, and that is the only part that’s meant to be fitted to the body, it looks terrible now!  Ugh, I don’t know if I want to deal with taking it in.  What should I do?  The zip goes through the waistband and it has huge box pleats evenly spaced all the way around.  More trouble than its worth or suck it up and make it work?

On to the review!  As I mentioned in an earlier post, I have been having some sewjo issues and to get me through these tough times I decided to sew up some sleepwear and robes and underwear stuff.  Finished item number one is up on deck!  I made the slip, view C of Butterick 6031 with some modifications based on the availability of soft stretch lace. 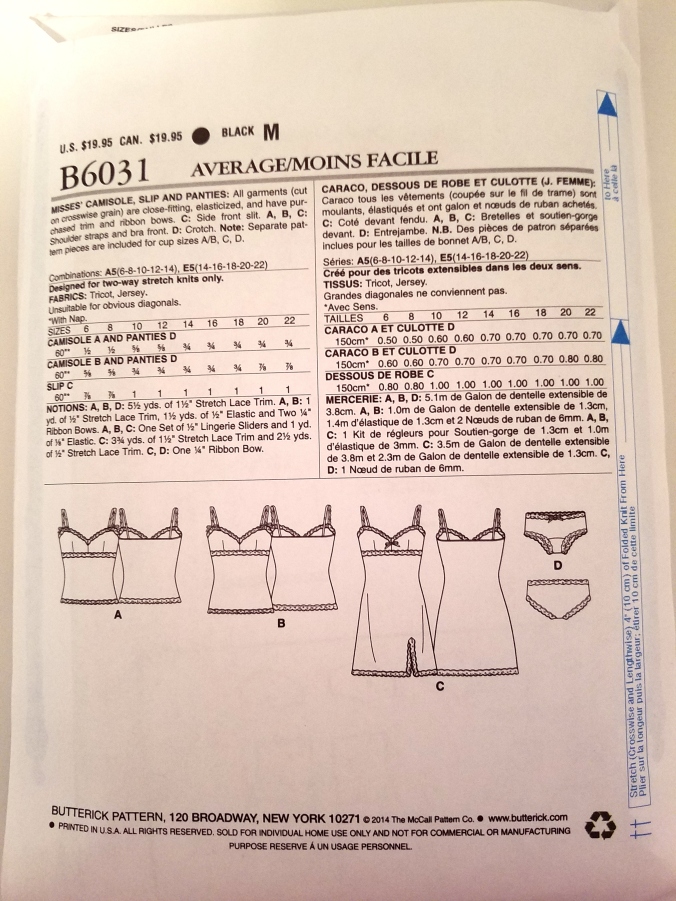 Clearly noted is the size of lace required.  I clearly ignored it.

Here’s the deal.  I was having some trouble sourcing the soft lingerie lace, Amazon helped me out, but I could only find something I liked in 2 1/2 in width.  This pattern calls for 1/2 inch and 1 1/2 inch stretch lace.  So, modifications were made, this was both good and bad.  Bad because some things didn’t line up quite right and good because its soft and stretchy and comfy and not at all a big deal for the most part.  Lets look at some pics. 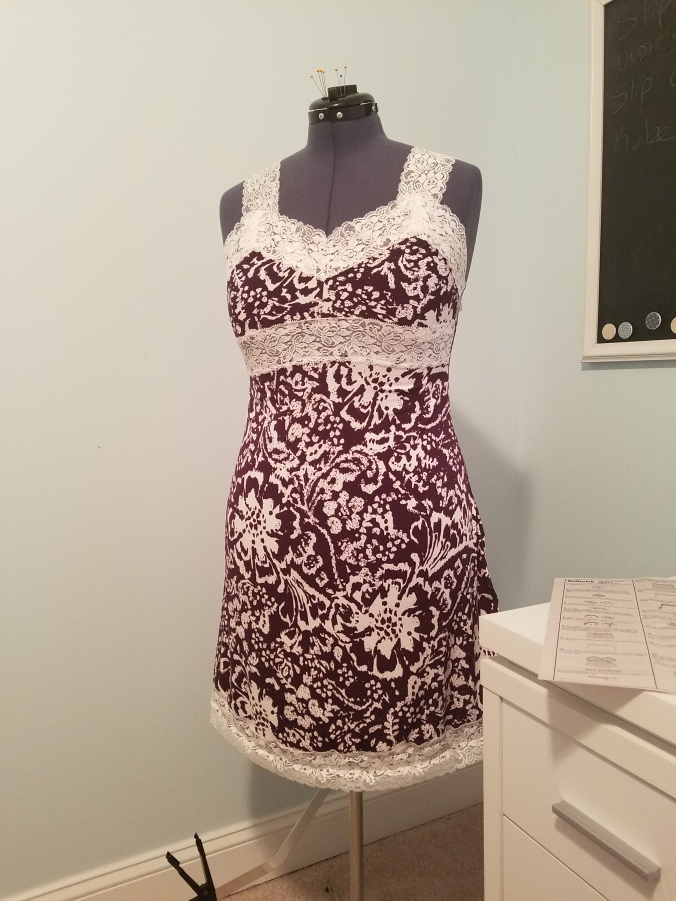 This is the front of the slip, I omitted the slit entirely due to the size of the lace I was using and how lazy I was feeling.  I also omitted all bows because I wasn’t interested in that nonsense.  My lace is much wider so I ended up sewing the edging lace at the very top and the bottom with two lines of stitching instead of one called out in the pattern instructions.  I thought it would be too weak on the top if I didn’t.  I wish I hadn’t on the bottom because it makes an unsightly bump in the middle of the lace.  I could have done without that because there was no structural integrity to deal with.  I also decided not to use straps with sliders and to just make the wide lace nice and snug and then I wouldn’t have any hard bits pressing into my skin while I sleep.  I know it will stretch out eventually but that’s ok, this was a trial run so I will deal with the consequences when they come. 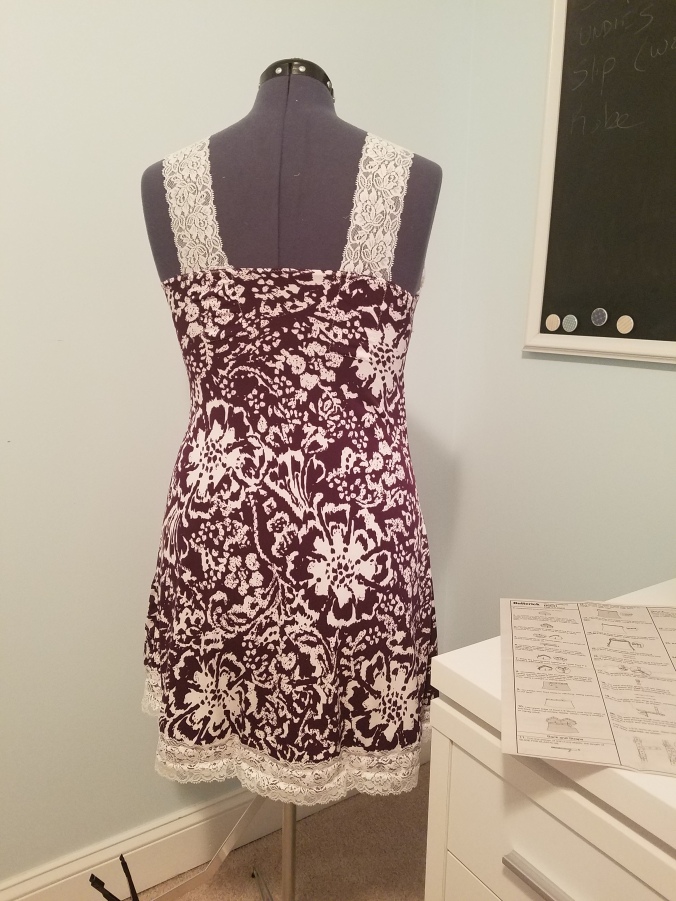 The back is ridiculously terrible.  since I only used the lace as straps, I really wanted to sew it on good, so I did big giant squares of stitching to attach it and it is just awful.  Do I care?  not for something I sleep in, but if this were an actual dress or something for public consumption, I wouldn’t have taken so many liberties with the construction.  I was also really sloppy putting the elastic in the back too.  I think it was late and I just wanted to wear  it to bed.  I also may have had some sake at that point and was feeling pretty “whatever” about everything. 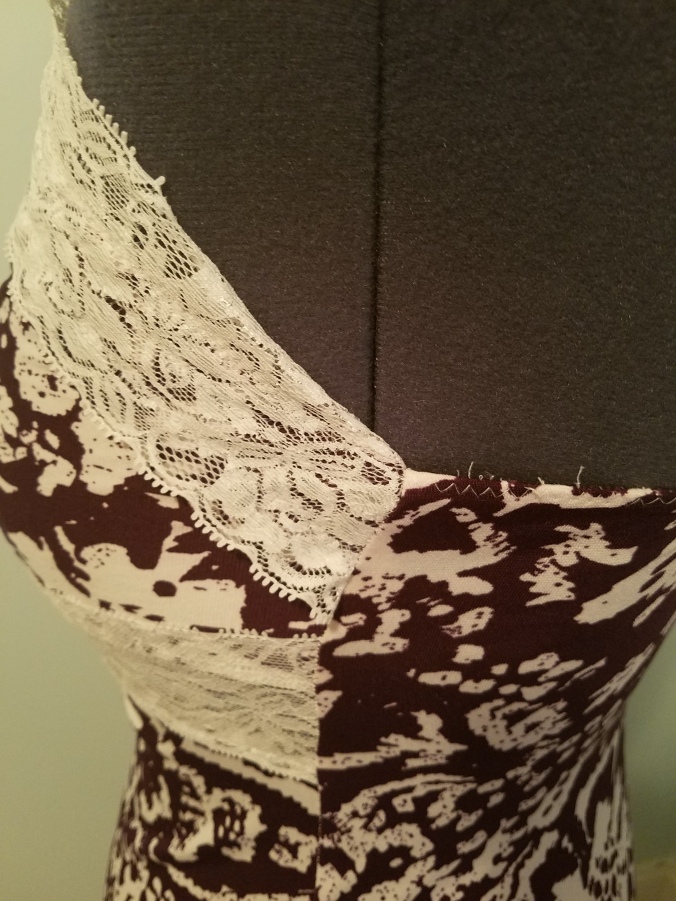 Folded lace crammed into the sloppiest back elastic in internet history.  No more sewing and sake drinking.  Good gravy, look at those threads everywhere.  I have no excuse.

The only serious trouble using the wrong lace gave me was a big overhang where the front and back connected at the side seams.the cup lace should end where the top of the back starts.  Mine was too long.  In order to get my notches to match up, I just folded that shit over to force it.  Am I proud?  No.  Does it fit and do its damn job?  Yes.  Will I do better next time?  Who knows.  This was also a nice reminder that I cant wait to have a serger.  I know its possible to sew successful knit garments on a regular machine, but it is probably not as much fun.  I was having some serious thread problems.  The lightening bolt stitch is a violent one and my machine really hated it.

I also attempted to sew the underwear from view D, but this lace really was not going to work with this.  I pinned it and just decided to wait till I can find what I really need.  Here is a nice picture illustrating why I made that decision. 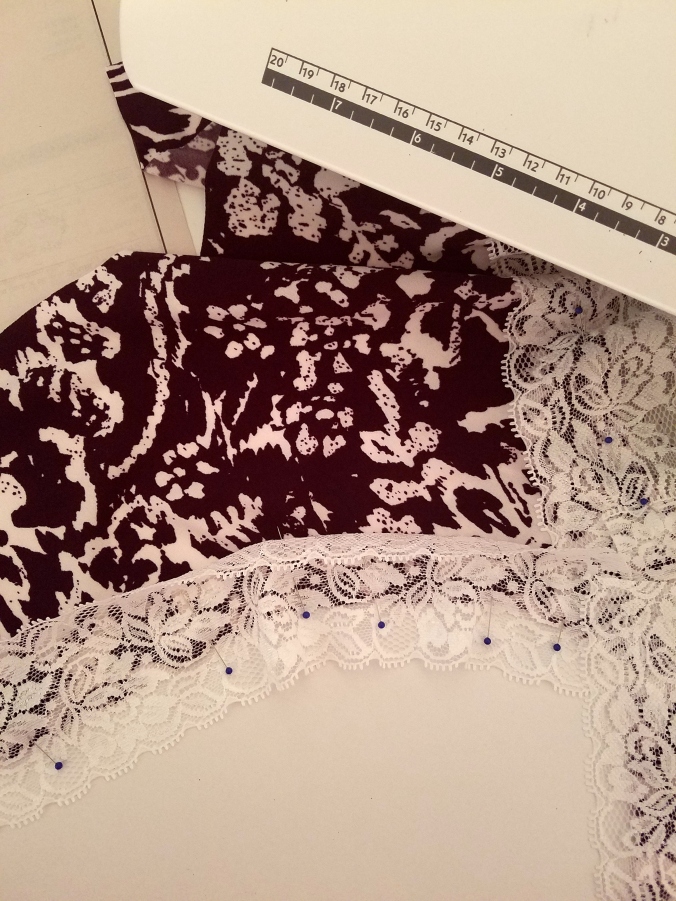 See how the width wont allow it to go around the sharper curves?  I saw it too, which is why this is on hold.  Also, this fabric is a plum color, all of my pics currently look yellow because I tried in vain to get the color to come out correctly.  #itdidnt

Next up is Vogue 9015, I will be making the robe and chemise.  One caveat… I can feel a cool breeze in the air and the days are getting ever so slightly shorter.  I am starting to feel some inspiration for transitional wardrobe pieces coming back.  I may switch gears, I may not… Even I don’t know what I will do after the robe.