I know I said there was going to be a Nicole Miller tunic pattern coming up, but lets just forget I said that since it turned into one hell of a disaster.  I will go back to it eventually, but for now, lets move on!

I had a firm talk with myself about slowing down and doing things carefully and just basically I need to chill out.  So I had an idea from Pinterest about a shirt I liked and I have a pattern that would be a good starting point to make my Pinterest inspired shirt from, I just need to make a muslin and see if it will fit.  I thought it might be a good idea to make a wearable muslin this time using Mcall’s 7546. 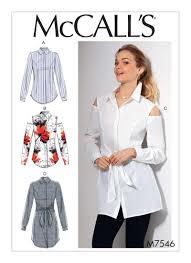 I am going with View C for the muslin, and view A for my inspiration top.  I am most concerned about the fit in the bust and hip area, I have been trying to get away with not doing an FBA and I have been having some really mediocre results with that.  So I used the pivot and slide method from Nancy Zieman’s fitting book.  According to her method I need to start with a size 12.  From there, I need to add a total of 4″ to the bust, 6″ to the waist and 8″ to the hip.  It sounds crazy, but I usually have really nice results from doing it her way.

So, I got all my pieces cut out and interfaced and got to work.  I really slowed down, marked my fabric very carefully, took my time and all that.  Step one… slash the giant dart and sew it together on all the pieces.  No problem…

No problem till I felt my scissors cut something thicker than I expected.  Dear lord, I have sliced right into my side seam in a completely different part of my pattern piece!  Apparently it got folded under there on accident.  So, there you have it.

See the nice big slice on my sheer gauzy fabric… Yeah, of course you do.  If you look at the bottom right corner of the picture you can see my fat cat’s gut in the frame.

Its ok, no big deal, its a muslin after all, maybe a little less wearable now, but nothing I can deal with, I got some sashiko thread in the mail the other day, I have some interfacing to stick it back together, I think it hides under the sash on the shirt anyway.  There are options for how I can deal with this, and honestly I think when I did it, after the 5 seconds of horror were over, I had a little laugh about it.  One of these days I will have a project that does not contain a catastrophe!  Will be back with more updates later.  I might make a little video showing some fabric that just arrived if I can figure out how to do it.  Don’t hold your breath, I am really bad at all this technology stuff, but I think it would be worth a try.